We were interviewed for BranD Magazine #23 – Typography Issue 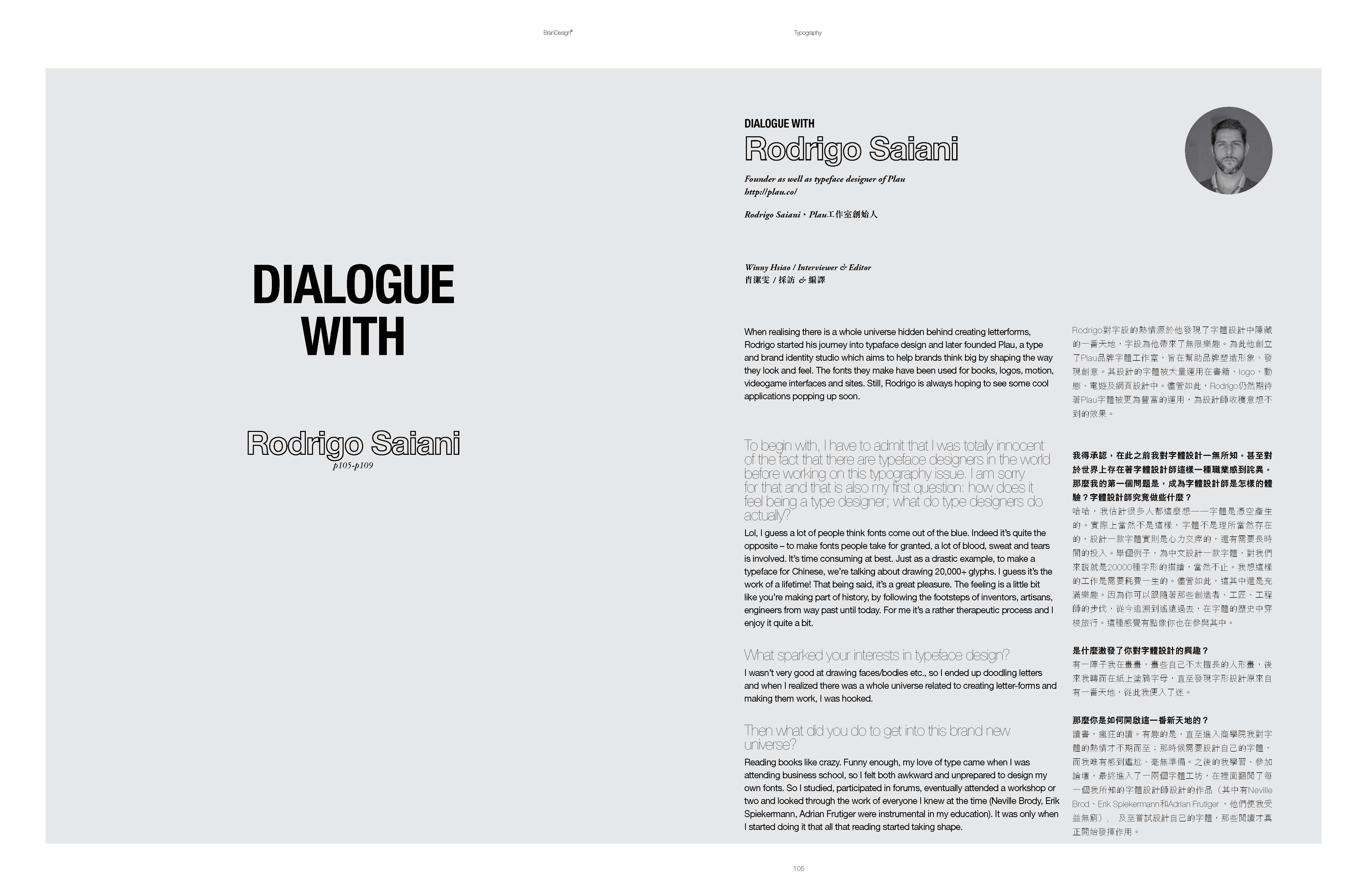 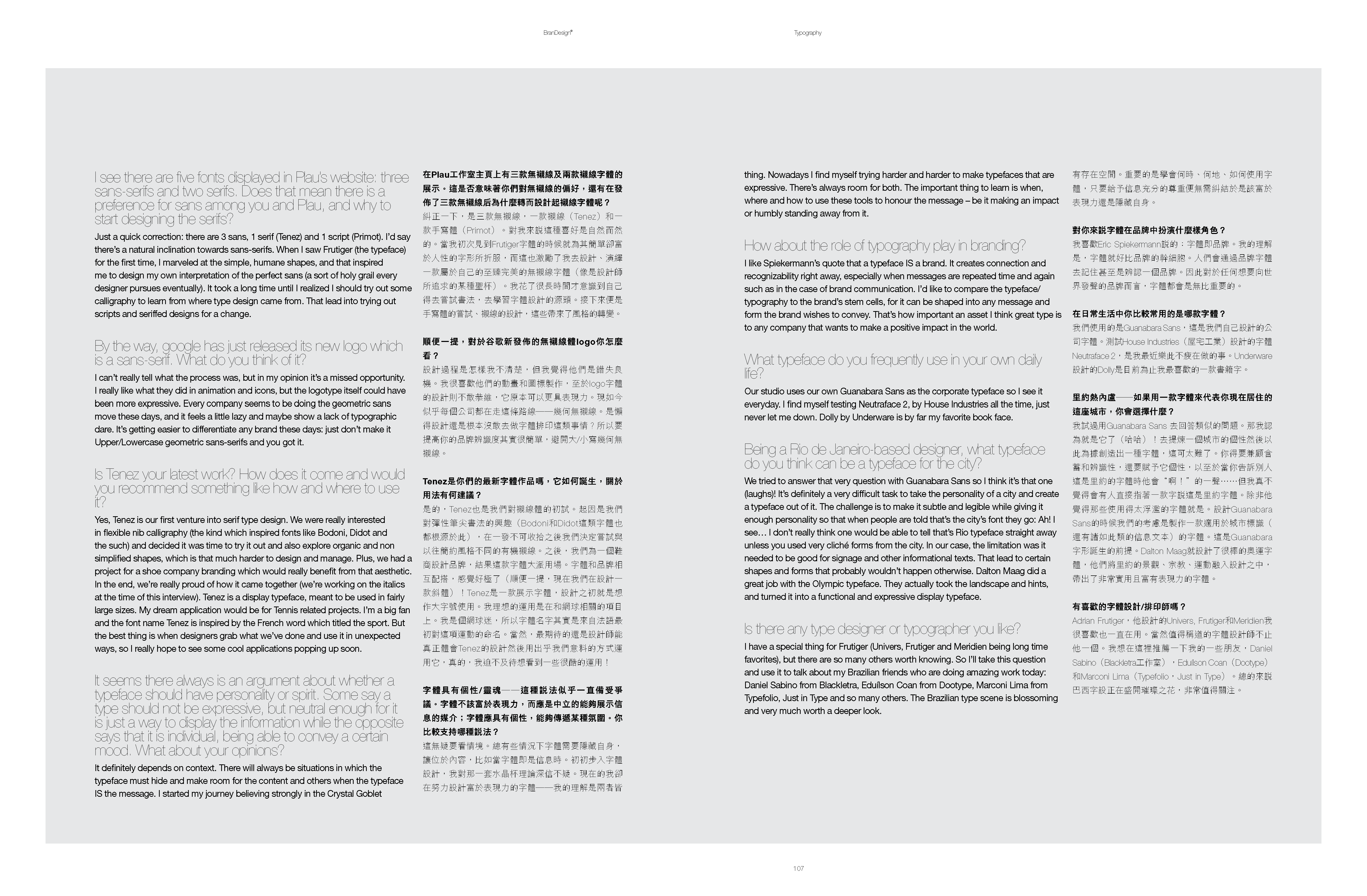 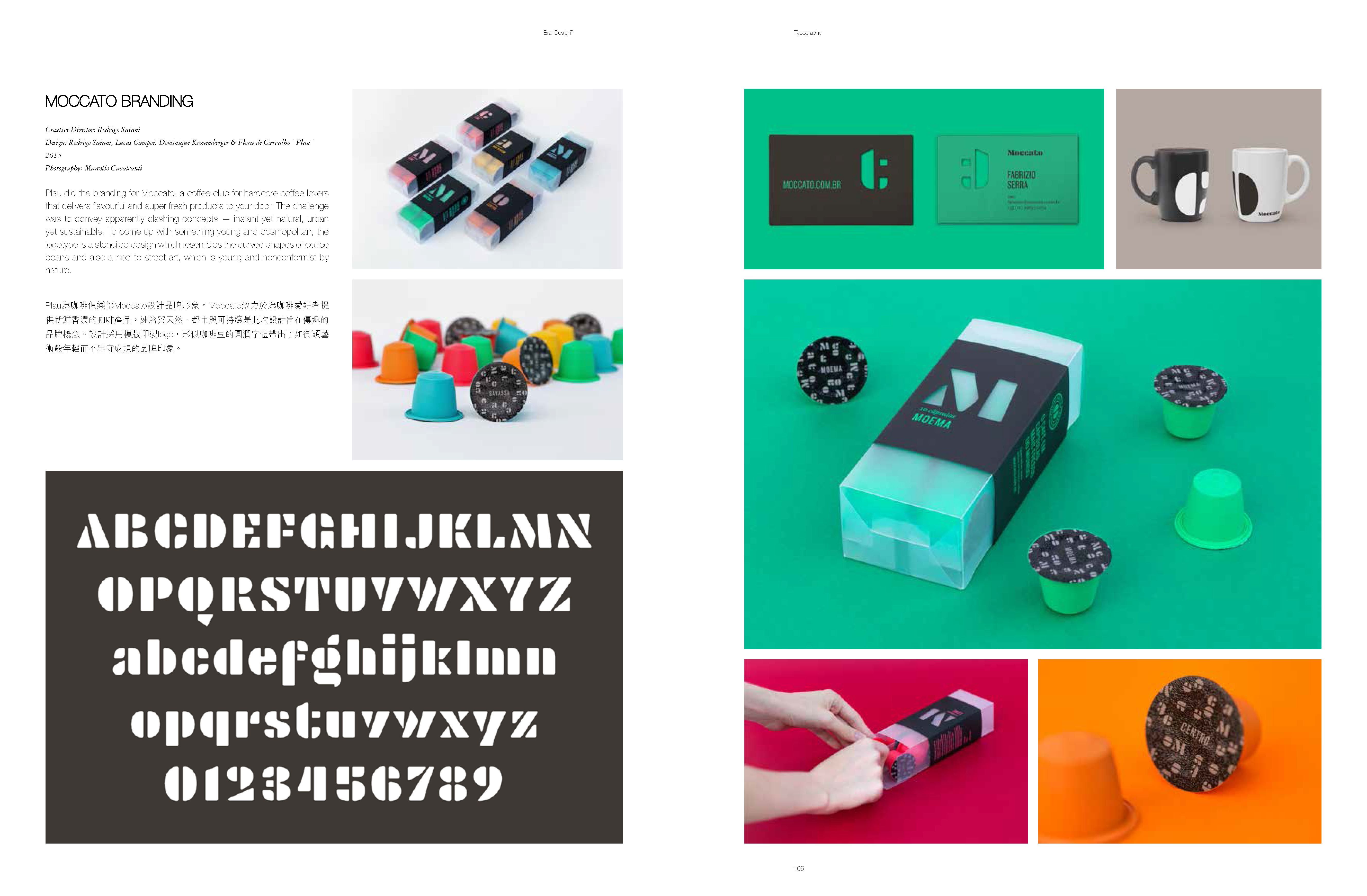 Rodrigo Saiani / Founder as well as typeface designer of Plau

When realizing there is a whole universe hidden behind creating letterforms, Rodrigo started his journey into typeface design and later founded Plau, a type and brand identity studio which aims to help brands think big by shaping the way they look and feel. The fonts they make have been used for books, logos, motion, videogame interfaces and sites. Still, Rodrigo is always hoping to see some cool applications popping up soon.

BranD Magazine (Winny Hsiao): To begin with, I have to admit that I was totally innocent of the fact that there are typeface designers in the world before working on this typography issue. I am sorry for that and that is also my first question: how does it feel being a type designer; what do type designers do actually?

Rodrigo Saiani: Lol, I guess a lot of people think fonts come out of the blue. Indeed it’s quite the opposite – to make fonts people take for granted, a lot of blood, sweat and tears

is involved. It’s time consuming at best. Just as a drastic example, to make a typeface for Chinese, we’re talking about drawing 20,000+ glyphs. I guess it’s the work of a lifetime! That being said, it’s a great pleasure. The feeling is a little bit like you’re making part of history, by following the footsteps of inventors, artisans, engineers from way past until today. For me it’s a rather therapeutic process and I enjoy it quite a bit.

BM: What sparked your interests in typeface design?

RS: I wasn’t very good at drawing faces/bodies etc., so I ended up doodling letters and when I realized there was a whole universe related to creating letter-forms and making them work, I was hooked.

BM: Then what did you do to get into this brand new universe?

RS: Reading books like crazy. Funny enough, my love of type came when I was attending business school, so I felt both awkward and unprepared to design my own fonts. So I studied, participated in forums, eventually attended a workshop or two and looked through the work of everyone I knew at the time (Neville Brody, Erik Spiekermann, Adrian Frutiger were instrumental in my education). It was only when I started doing it that all that reading started taking shape.

BM: I see there are five fonts displayed in Plau’s website: three sans-serifs and two serifs. Does that mean there is a preference for sans among you and Plau, and why to start designing the serifs?

RS: Just a quick correction: there are 3 sans, 1 serif (Tenez) and 1 script (Primot). I’d say there’s a natural inclination towards sans-serifs. When I saw Frutiger (the typeface) for the first time, I marveled at the simple, humane shapes, and that inspired me to design my own interpretation of the perfect sans (a sort of holy grail every designer pursues eventually). It took a long time until I realized I should try out some calligraphy to learn from where type design came from. That lead into trying out scripts and seriffed designs for a change.

BM: By the way, google has just released its new logo which is a sans-serif. What do you think of it?

RS: I can’t really tell what the process was, but in my opinion it’s a missed opportunity. I really like what they did in animation and icons, but the logotype itself could have been more expressive. Every company seems to be doing the geometric sans move these days, and it feels a little lazy and maybe show a lack of typographic dare. It’s getting easier to differentiate any brand these days: just don’t make it Upper/Lowercase geometric sans-serifs and you got it.

BM: Is Tenez your latest work? How does it come and would you recommend something like how and where to use it?

RS: Yes, Tenez is our first venture into serif type design. We were really interested in flexible nib calligraphy (the kind which inspired fonts like Bodoni, Didot and the such) and decided it was time to try it out and also explore organic and non simplified shapes, which is that much harder to design and manage. Plus, we had a project for a shoe company branding which would really benefit from that aesthetic. In the end, we’re really proud of how it came together (we’re working on the italics at the time of this interview). Tenez is a display typeface, meant to be used in fairly large sizes. My dream application would be for Tennis related projects. I’m a big fan and the font name Tenez is inspired by the French word which titled the sport. But the best thing is when designers grab what we’ve done and use it in unexpected ways, so I really hope to see some cool applications popping up soon.

BM: It seems there always is an argument about whether a typeface should have personality or spirit. Some say a type should not be expressive, but neutral enough for it is just a way to display the information while the opposite says that it is individual, being able to convey a certain mood. What about your opinions?

RS: It definitely depends on context. There will always be situations in which the typeface must hide and make room for the content and others when the typeface IS the message. I started my journey believing strongly in the Crystal Goblet thing. Nowadays I find myself trying harder and harder to make typefaces that are expressive. There’s always room for both. The important thing to learn is when, where and how to use these tools to honour the message – be it making an impact or humbly standing away from it.

BM: How about the role of typography play in branding?

RS: I like Spiekermann’s quote that a typeface IS a brand. It creates connection and recognizability right away, especially when messages are repeated time and again such as in the case of brand communication. I’d like to compare the typeface/typography to the brand’s stem cells, for it can be shaped into any message and form the brand wishes to convey. That’s how important an asset I think great type is to any company that wants to make a positive impact in the world.

BM: What typeface do you frequently use in your own daily life?

RS: Our studio uses our own Guanabara Sans as the corporate typeface so I see it everyday. I find myself testing Neutraface 2, by House Industries all the time, just never let me down. Dolly by Underware is by far my favorite book face.

BM: Being a Rio de Janeiro-based designer, what typeface do you think can be a typeface for the city?

RS: We tried to answer that very question with Guanabara Sans so I think it’s that one (laughs)! It’s definitely a very difficult task to take the personality of a city and create a typeface out of it. The challenge is to make it subtle and legible while giving it enough personality so that when people are told that’s the city’s font they go: Ah! I see… I don’t really think one would be able to tell that’s Rio typeface straight away unless you used very cliché forms from the city. In our case, the limitation was it needed to be good for signage and other informational texts. That lead to certain shapes and forms that probably wouldn’t happen otherwise. Dalton Maag did a great job with the Olympic typeface. They actually took the landscape and hints, and turned it into a functional and expressive display typeface.

BM: Is there any type designer or typographer you like?

RS: I have a special thing for Frutiger (Univers, Frutiger and Meridien being long time favorites), but there are so many others worth knowing. So I’ll take this question and use it to talk about my Brazilian friends who are doing amazing work today: Daniel Sabino from Blackletra, Eduílson Coan from Dootype, Marconi Lima from Typefolio, Just in Type and so many others. The Brazilian type scene is blossoming and very much worth a deeper look.

Typeface as the ultimate branding tool